The Devil Is In The Details

Captain Hollon Richardson, Brigadier General Solomon Meredith’s aides de camp, at a postwar reunion with the 19th Indiana, while recounting the death of Sergeant Major Asa Blanchard and the woundings of Lieutenant Colonel William Dudley and Meredith, casually said that he retired the brigade to its second position on the field. That position is where the Iron Brigade monuments are located at Gettysburg along Meredith Avenue. In the general recounting of the battle, many historians have assumed that Meredith Avenue marks the original position of the brigade. It definitely is not.


Position A. Following the defeat of Archer’s Brigade, Meredith ordered the Iron Brigade to retire to the eastern side of Willoughby Run. The attack, however had split the command. The 19th Indiana, the 7th Wisconsin, and the 2nd Wisconsin, respectively, took a position along the first ridge paralleling the creek. The ridge gradually rose from a marshy drainage on the southern end to a rocky ledge some 10 feet above the creek about 1000 feet to the north. The three regiments on the line extended north from the creek bottom for about 600 feet.


Position B. The 24th Michigan, the brigade’s largest regiment, cross Willoughby Run about 100 yards south of the 19th Indiana, facing east. Captain Richardson, on his own accord, according to one witness, ordered the regiment “front forward on the left battalion,” which Colonel Henry Morrow of the 24th verified in his afteraction report where he called the “left battalion” the “first battalion.” To change “front forward,” the regiment had to left wheel to face north. The maneuver placed the left of the regiment in the low ground and the right flank just above the crest where the right of Archer’s Brigade had lain.


Apparently, as I see the scenario unfolding, Meredith quickly realized that he could not successfully defend that position by leaving the brigade in a in a defilade from the west side of the creek. Nor could he let the 24th Michigan remain in the open ground below the woods. General Abner Doubleday, I Corps commanding, had arrived on the field and ordered Morrow to defend the woods at all costs because he considered it the key to the Federal defense of McPherson’s Ridge and the Union left. Meredith, therefore, chose the higher ridge, east of his current line, as the better position from which to hold Herbst Woods.


It probably was after 11:00 a.m. because the 150th Pennsylvania had arrived on the crest of the ridge, facing west with its left flank touching the northern side of the woods which provided Meredith with a point on which to anchor his brigade.


Position C. The small 2nd Wisconsin faced north at right angles to the Pennsylvanians. The 7th Wisconsin, following the contour of the ridge, connected with the left of the 2nd, creating the “little V” about which Colonel John Callis (7th Wisconsin) later wrote. Meredith plugged the 24th Michigan in between the 7th Wisconsin and the 19th Indiana, which had to refuse the right of the regiment up hill on a northwesterly front, to connect with the left wing of the 24th Michigan/ Colonels Dudley and Morrow repeatedly requested permission to retire ro the top of the hill rather than stay in the indefensible lower ground. They did so to no avail. Doubleday’s decision to keep them where they were cost a lot of good soldiers their lives. 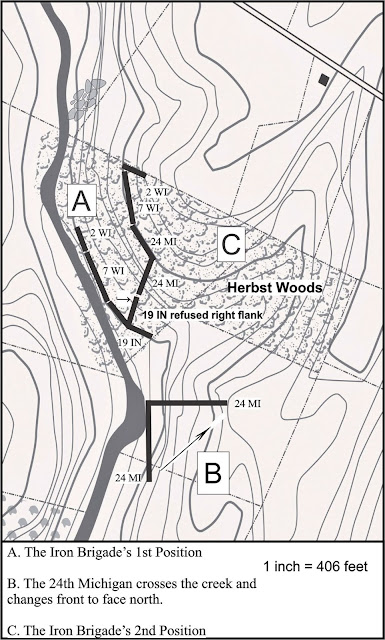 Explaining this had explained why to many of the primary sources seem contradictory, when they actually are not. It also explains how the 19th Indiana and the 24th Michigan were shot to pieces.
Posted by John MIchael Priest at 7:42 AM