The Deaths of Two Lieutenants

My heart and prayers go out to everyone affected by this current pandemic. I would like to write something deep and important, however I am not adequate to the task. That would take someone far smarter than I. Therefore, I decided to share some thoughts I have about the Confederate occupation of the Railroad Cut at Gettysburg on July 1, 1863.


This exercise began while working on my account of the Railroad Cut in my new Gettysburg manuscript. After the cut had been secured and the 6th Wisconsin was mopping up, Private John Killmartin (Company G, 6th Wisconsin) joined a few other men in pursuit of Mississippians and North Carolinians trying to escape north, out of the eastern side of the cut. The Wisconsiners caught up with them and while bagging about 10 the Confederates, their lieutenant fired his pistol at them. John Killmartin shot him dead.[1]


Here is where I started tracing the line from this historical spiderweb. I found that only two Confederate lieutenants died in the track bed – 1st Lt. John C. Lauderdale (Company B, 2nd Mississippi) and 2nd Lt. Mordecai Lee (Company G, 55th North Carolina). I had to find out, if at all possible where the two of them would have been in the regimental lines. I therefore turned to Hardees Tactics.


According to the Tactics, regimental companies were to fall in from right to left, facing south (the bottom of this page), because the regiment went into action. facing east, then south as follows:


The 2nd Mississippi had an additional company – L which in this article I arbitrarily placed on the right of the line. L A F D I C [c] H E K G B. I did this based upon the fact that Company B’s casualties include the following: 1 killed (Lieutenant Lauderdale), 1 wounded and 1 mortally wounded and captured. Green McCarley was the only mortally wounded man in Company B who was not captured days after the battle. Therefore, he had to have been captured by the skirmish line from the 6th Wisconsin which went out before noon. Corporals Kelly and Charles O. Jones (Company I, 6th Wisconsin) found the reb whom they shot down as he bolted from the grass north of the cut and east of Sheads Woods where the regiment was reforming. Kelly noted he was shot through the leg. Ten were captured outright attempting to escape.[2]


Adding the mortally wounded and captured to the captured results in 11 captured. The regiment reported 95 captured. Removing those 11 from the 2nd Mississippi’s captured at the cut leave 84 prisoners of war. I deducted those 84 from the 6th Wisconsin’s 232 captured and got 148 other POWs.[3] The 55th North Carolina had exactly 148 officers and men captured in the cut. The 1 missing in action more than likely should be added either to the killed or the wounded and captured.


By using Hardee’s formation, I concluded that Company B was on the left flank of the 2nd Mississippi. Since their captured numbers are apparently not in Dawes’s numbers, they had to have occurred after the fighting was over and the 6th Wisconsin was mopping up, which agrees with Kelly’s remembrance of the situation. Lieutenant Lauderdale would have been with Company B and therefore had to have been the officer Killmartin shot down.


Company L, more than likely, was on the right of Company A. The regiment went into action with about 522 officers and men. Deducting 45 line officers and an estimated 22 sergeants serving as file closers that would have left 455 rank and file on line.[4] In parade ground formation, the regiment would have covered about 455 feet.[5]


I had to estimate how many men the two regiments lost while going into action. I started with the casualties I believed I could confirm. The one thing I noticed is that the Buseys identified when and where the mortally wounded/captured and the wounded/captured were captured. I took the individuals who were captured 1 – 13 days after the battle and included them in the regiments’ wounded in action because that is how they would have appeared at that time on the rosters. I also concluded that the reason they ended up in field hospitals and in the ranks during the retreat is because they would have had to have been rescued from the areas of the field in Confederate control before the railroad cut incident. I also did not pay attention to any men where they could not substantiate when they became casualties, which removes about 12 or less men from this study.


I concluded the men listed as captured or wounded/captured, and mortally wounded/captured on July 1 had to have been captured in the railroad cut or just north of the cut between the cut and Sheads Woods. Those were the areas occupied for a few hours or so by Federal troops after the attack against the cut. They were hauled in during the mop up operations.


This resulted in a chart where I could divide the number of casualties taken after the battle to the total number of wounded during the entire day. I then constructed a table of the regimental lines in in order from the right flank to the left flank of each regiment and calculated the percentage of men wounded/mortally wounded and captured against the total number wounded, the results of which are listed as follows:


55th North Carolina: excluding B which was in skirmish and not at the cut.


To estimate the number of casualties in the assaults against the 147th New York, 76th New York, and 56th Pennsylvania I applied those individual percentages to the total number of killed and wounded, and known wounded which produced the tables shown below.

In battle line, by wings, it looks like this:


This makes perfect sense. Because the right wing of the 2nd hit the 2 right companies of the 147th New York from the north. The left wing encountered the 56th Pennsylvania.


Taking those losses into account, the 2nd Mississippi, not counting field and staff, lost around 50 feet of frontage. This reduced the frontage to about 400 feet. Again, this is an estimate, it being impossible to get the exact frontage once the fighting started. Taking that into account the 55th North Carolina, which started out, deducting 20 file closers, and at least 50 feet because Company B was on skirmish, the front shrunk about 70 feet. Of the original 617 in line, it now had around 550 or a 550 foot front between 9 companies. These numbers matter when trying to place the approximate flanks of the two regiments in the railroad cut.


The map below shows the regimental fronts at the cut at the time of its capture. Company K, 55th North Carolina had no one captured, suggesting that it left the cut before the 6th Wisconsin charged it, which left Company G stranded. The frontage represents the approximate length of the lines, despite the fact that the two Confederate regiments actually got jumbled together in the charge. The 6th Wisconsin lost about 50% of its men in the attack from the Chambersburg Road to the cut. 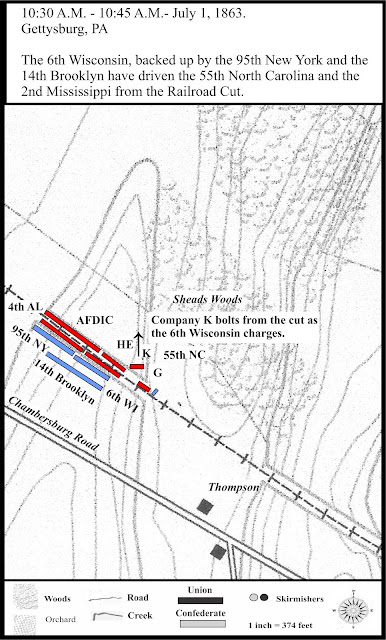 Despite their assertions to taking heavy casualties, the 14th Brooklyn and the 95th New York have no records by way of a nominal list to substantiate they lost heavily in the attack. They had been on the right of the Iron Brigade line at Herbst Woods on the crest of McPherson’s Ridge, west of the barn where they engaged the 5th Alabama Battalion, which was acting as skirmishers for Brig. Gen. James Archer’s brigade. The suffered probably a handful of casualties there before being sent to the 6th Wisconsin’s assistance. I can only account for 5 casualties in that attack. One was killed with three of the 4 men evacuating him from the field after the action, and the other died from losing his leg.[6] The accounts from the 6th Wisconsin show the 95th New York on the left of the line and the 14th Brooklyn overlapping the rear of the 6th Wisconsin and not on the left of the 95th as usually shown.[7] Therefore, to represent their frontage somewhat accurately, I reduced their numbers to 200 men (95th New York) and 300 (14th Brooklyn).


With that all in mind, I constructed two charts, one of the 2nd Mississippi and the other for the 55th North Carolina, reflecting their casualties in the cut which includes all of the captured in the fighting.

Using that data, I constructed two battle line charts to compare the casualties in cut in the probable order in which they occurred.


The red numbers represent the 11 men in Company B who got flushed out of the cut after the fighting was over and the one man wounded in the leg and left on the field. Note that the captured in black total the number of men wounded in 10 of the 11 companies. Company B had 10 men captured after the fight and one who was reported wounded but ended up being left on the field and captured by the federal skirmish line.  He would not have been counted among the captured at the cut because he was taken later. Either way, Dawes could have miscounted his prisoners also and erred by one.


What do the casualty numbers tell me about what happened at the cut?


The 55th North Carolina overlapped the rear of the 2nd Mississippi by 152 feet. Company K and Company G occupied around 120 feet of that ground until Company K quit the field, leaving a gap in the line and Company G with 2nd Lt. Mordecai Lee to get flanked by 20 men from the right of the 6th Wisconsin. Those men killed, mortally wounded, or wounded 22 of the Carolinians and captured another 19.


The entire front of the 6th Wisconsin did not overlap all of Company B, 2nd Mississippi. The 20 men, who overpowered Company G, 55th Mississippi, more than likely missed part of Company B. As the Yankees began rousting out prisoners, Lieutenant Lauderdale, at his assigned post to the left rear of the company, apparently saw an opportunity to escape when Kelly and some of the men in the flanking party spotted them and gave chase. That is when the lieutenant got himself killed.


This blog has really spun into quite a cobweb from the single thread with which I started. I think I am right. Judge the maps, the numbers, and the logic for yourself. I am quite satisfied that I have brought those two men to light and have explained where and how they passed into the next life.